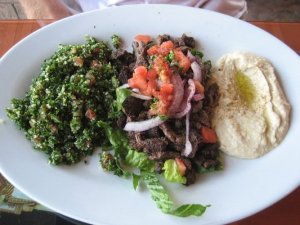 A vital nutrient for energy and more.

Iron deficiency in the No.1 most common nutrient deficiency.

Fitness goals not being reached?

If you are not able to sustain your stamina during your workouts, particularly if you are a women in the reproductive stage of life, you may be iron deficient?

It’s best to make sure you have good levels of iron before you fall pregnant.

Iron requirements increase during pregnancy as your blood volume increases up to 30% and more is lost during childbirth.  If you start off deficient you will more than likely end up anaemic.

If you suspect you may be lacking in iron, get a blood test and seek professional advice before taking supplements.

Too much iron can be toxic.

The recommended upper limit is 45mg/day.

Iron overload can also cause fatigue and apathy, tissue damage of liver and increased risk of infections.  Haemochromatosis is a common genetic disorder that causes iron overload, resulting in excess iron depositing in joints and organs. Left untreated it can increase risk of diabetes, heart disease, arthritis and liver cancer.

Daily requirements for men and women of non reproductive age is 8mg/day, for reproductive age women it increases to 18mg/day and if you’re pregnant, 27mg/day.  Children going through rapid growth also need more iron, depending on the stage, from 8-11mg/day.

If you suffer from any gastrointestinal disease, e.g. coeliac, inflammatory bowel disease, Crohn’s, you may only be absorbing as little as 2%.

Anyone with digestive disorders should have their iron levels tested regularly and are likely to need supplementation.

Where do I get iron from?

You don’t need to be a meat eater to get iron but it helps as it is absorbed more effectively from animal flesh.

Vegetables sources only contain non-haeme iron.  Animal sources also contain haeme iron which helps increase the amount of non haeme iron absorbed from the animal and vegetable sources that are eaten at the meal.  It also contains MFP factor the promotes absorption.

The amount you absorb will vary depending on the food type and your requirements.

If you have compromised digestion you may be absorbing as little as 2% of the iron content of your foods.  Anyone with digestive disorders should have their iron levels tested regularly and are likely to need supplementation.

How can I maximize my intake if I am a vegetarian?

Vegetables, legumes and grains  all contain varying amounts of  iron, with your dark green vegetables being a stand out.  Eating vitamin C rich foods at the same meal will enhance iron absorption.

Cooking in an iron skillet will also increase the amount of iron in your meals.

If you would like to know more about how to adjust your meals to include and absorb more iron, seed advice from a nutritionist.

Roles in the body

Apart from it’s primary role in the body as part of haemoglobin, in red blood cells, it is also part of myoglobin , required by muscles to contract, carrying oxygen around the body to cells to be used in energy production.  It;s also involved in energy production via the mitochondria (your cell’s power houses), acting as an electron carrier.

Iron is utilized by numerous metabolic enzymes including those that make neurotransmitters, e.g. your feel good serotonin, adrenaline & dopamine, that give you mental clarity and alertness.  Likewise enzymes for making collagen,  amino acids and hormones also use iron.

Iron is vital for energy.

Too little and you’ll run out of steam but beware too much can be toxic.  If your levels drop too low you will develop anaemia.

So remember if you suspect you may be lacking in iron or are planning a pregnancy get a blood test and seek professional advice before taking supplements.